How did tractor trailers contribute to the mess in Atlanta’s #Snowjam2014? 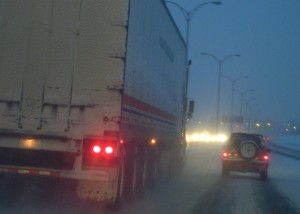 When Atlanta’s winter storm (#snowjam2014 #snowcalypse2014) hit metro Atlanta on Tuesday, causing an epic icy gridlock, I was taking depositions in Macon on a truck crash wrongful death case. We finally got through to our judge’s office to get an extension of a deadline for completing depositions, then headed back to Atlanta.

After hours in gridlock on I-75, I got off the downtown connector and took a circuitous route through icy secondary streets, eventually getting home shortly before midnight, eleven hours after I left Macon. A lifetime of driving Atlanta streets helps in improvising passable back routes. I was more fortunate that many folks who were stranded overnight in their cars or emergency shelters.

Many factors contributed to metro Atlanta’s vulnerability to a mere two inches of snow. I am not going to get into the blame game, except to note that:

One thing that did not surprise me in Snowjam 2014, a/k/a Snowlalypse, was the role tractor trailers played in the gridlock. Along my 11-hour trip home through ice and snow, I saw many tractor trailers operating as close to the posted speed limits as traffic conditions would permit until traffic ground to a halt. I saw very few tractor trailers that had slowed down without being blocked by traffic or that had been parked out of the traffic lanes to wait out the storm.

According to a report by Mike Morris and Andria Simmons in the Atlanta Journal-Constitution, GDOT Deputy Commissioner Todd Long pointed to traffic monitors and said, “What’s in common in every single accident we have today? Tractor trailers.”

In addition, tractor trailers contributed to gridlock by blocking expressway traffic lanes and exit ramps, as they could not get traction to get up even slight grades and hills, according to GDOT’s chief engineer Russell McMurry.

GDOT Deputy Commissioner Long said trucking companies continued to send deliveries into Atlanta after the storm started. He questioned whether there was legitimate need for them to be traveling inside the I-285 perimeter loop.  Pursuant to the authority granted in OCGA § 40-6-51, Georgia DOT has prohibited commercial truck traffic inside the I-285 perimeter of Atlanta except under limited conditions. GDOT requires that all trucks traveling on I-75, I-85, or I-20 must take I-285 around the city, except for the following reasons:

1. Pick up or delivery to or from a shipper physically located inside I-285;

2. Going to or from the carrier’s terminal facilities physically located inside I-285;

3. Going to or from a repair facility for service which is physically located inside I- 285;

4. A driver going to or from his residence located within the perimeter.

“They could be making deliveries, but it’s hard to believe they would be when most of the businesses are closed,” Long said.

Pretty much the same thing happened in the winter storm of January 2011. I recall I-20 inbound toward Atlanta was clogged with tractor trailers that kept driving into the snow and ice storm after they should have parked to wait out the storm. It took days to clear the tractor trailers from the expressways.

This is stated simply in the official Regulatory Guidance: “Under this section, the driver is clearly responsible for the safe operation of the vehicle and the decision to cease operation because of hazardous conditions.”

Moreover, the Commercial Driver’s License handbook for every state in the US clearly explains the rule and specifies that in hazardous weather conditions the driver should slow down by at least one-third below the speed limit, and if necessary pull over.

Fortunately, I have not yet heard of any catastrophic crashes with tractor trailers in Atlanta’s Snowjam 2014. That may be because few vehicles could get up any speed while slipping and sliding on ice.