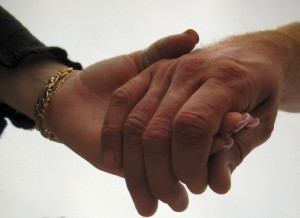 The “laying on of hands” can resonate powerfully. In my background, it has spiritual and theological implications as a ritual of blessing or of healing. Can this and other senses beyond sight and hearing also be part of legitimate trial advocacy in conveying truth to jurors?

The Georgia Court of Appeals recently said yes in the context of a case where two experts disagreed on whether there was a difference in temperature of the hands of a plaintiff who had a diagnosis of complex regional pain syndrome (also known as reflex sympathetic dystrophy), due to medical malpractice. (Kudos to Lloyd Bell who ably tried the case and called me to brainstorm about this while the appeal was pending.)

On appeal, the court rejected defense arguments that the trial judge abused his discretion by allowing jurors to make a medical diagnosis, that it made them witnesses who could not be cross-examined, that the exercise had no probative value, and that such a practice has been rejected by other courts around the country.

Federal Rule of Evidence 401 (O.C.G.A. § 24–4–401) states that relevant evidence is evidence that has “any tendency to make the existence of any fact that is of consequence to the determination of the action more probable or less probable than it would be without the evidence.” Temperature of the hands was indisputably relevant to deciding whether the plaintiff had CRPS.

The court discussed cases from other states in which jurors were allowed to use touch, taste and smell to determine facts. This included cases where they were allowed to feel a lump in a plaintiff’s arm, fractured skull, arms and legs to determine temperature differentials, and other body parts. The court also cited favorably two old Georgia moonshine cases, Union v. State, 7 Ga.App. 27, 27(4), 66 S.E. 24 (1909) (no error if jurors tasted liquid from jug admitted into evidence in illegal whiskey trial); Morse v. State, 10 Ga.App. 61, 63(3), 72 S.E. 534 (1911) (jurors may utilize all of their senses, including taste and smell, in determining whether liquid was an intoxicating liquor).

What are the implications of this ruling for trial advocacy? How else can lawyers find ways to allow jurors to use all their senses in the search for truth? And how much would be too much, overreaching to the point of turning off judges and jurors?

Consider all the senses and think outside the box. Traditionally, we think of “five senses” — sight, hearing, touch, smell, and taste – a short list credited to Aristotle. But researchers now have expanded the list to 21 senses:

I am not smart enough to immediately think of appropriate ways to employ all these senses of jurors in trial advocacy. However, here are a few examples both commonplace and slightly outside of customary usage. Any lawyer tempted to try techniques that are not customary should seek the judge’s permission in advance and have a trial memorandum to show the judge that it really is OK to allow a slightly unconventional demonstrative aid.

Perhaps lawyers more creative than I will think of ways to use others of those many senses for communicating the truth to jurors at trial. In doing so, however, lawyers should take care not to just develop a “bag of tricks” but to employ all the senses as a means of communicating truth.

Ken Shigley is an Atlanta trial attorney focused on serious personal injury and wrongful death cases. He is currently chair of the American Association for Justice Motor Vehicle Collision, Highway & Premises Liability Section. Previously he served as president of the State Bar of Georgia and chair of the board of trustees of the Institute for Continuing Legal Education in Georgia. He is lead author of Georgia Law of Torts: Trial Preparation and Practice and a board certified civil trial attorney of the National Board of Trial Advocacy.